Description:  The MC1R gene encodes the Melanocortin-1 receptor, which is responsible for regulating pigment production in melanocytes. The locus E has 3 alleles Em> E> e, which are sorted by dominance. The standard E allele encodes a functional MC1R that allows the synthesis of black pigment, eumelanin. If a dog has at least one dominant allele in this gene (E / -) the resulting coat color is further influenced by the A and K loci. This means that the resulting coat color may not be black. Mutation of the MC1R gene results in non-functional receptors and changes pigment production to pheomelanin. Since the production of eumelanin is deactivated, the effect of other loci is not possible. Dogs homozygous for the e/e allele can only produce pheomelanin, which results in a plain-colored red, yellow, or cream coloring of the dog’s hair, and alleles at loci A, B and K are hidden. (Everts et al., 2000; Newton et al., 2000). Different breeds of dogs with the genotype e/e express different color shades from light cream (golden retriever) to dark red (Irish setter).

Sample: EDTA whole blood (1.0 ml) or 2 buccal brushes. For official purposes, the confirmation of the dog’s identity by Veterinarian is recommended. 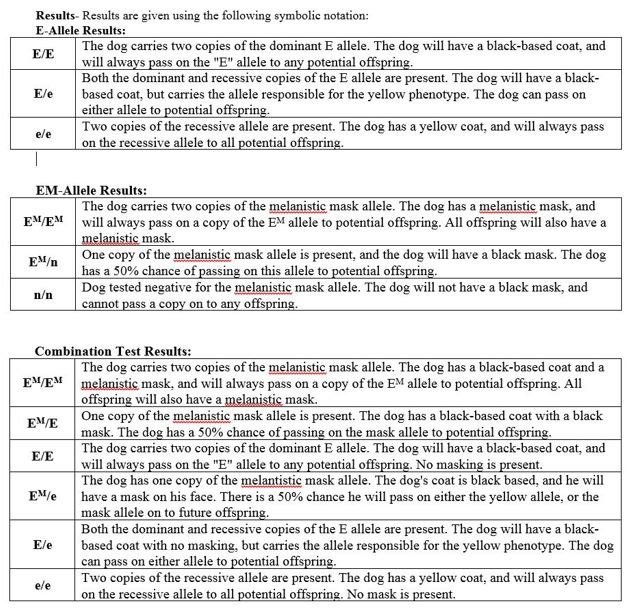 1 + 1 DISCOUNT  Recommend our laboratory to your friends!

A new customer will receive a 5% discount on order with the code RECOM-5 and your name in the “note/promo code” window when creating an online order, or by writing on a paper order (below under TAB.2)